The Rotten Donut (also known as the Toxic Donut) is a utility item that can be bought from the store. It will cause an NPC who saw the donut to eat it then go to a random room, so the player must be careful of placing the donut. Also, once a certain amount of time has passed, the NPC who was affected by the donut will return to where he previously was, checking any doors along the way so don't expect them to be gone for long.

In Robbery Bob 2: Double Trouble, it is renamed to Toxic Donut but retains the same function.

This Donut looks delicious but will turn any poor stomachs up-side down.

It costs 30 coins to buy a set of 2 Rotten Donuts.

When someone sees the Donut.

After someone eats the Donut. 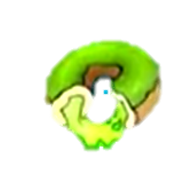 Add a photo to this gallery

Retrieved from "https://robberybob.fandom.com/wiki/Rotten_Donut?oldid=6675"
Community content is available under CC-BY-SA unless otherwise noted.