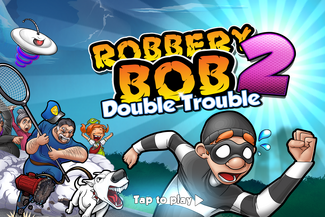 Robbery Bob 2 (formerly known as Robbery Bob 2: Double Trouble) is an adventure arcade game developed by Level Eight AB and published by Chillingo and Deca Games for iOS and Android. This game is a sequel to Robbery Bob.

Bob's adventure continues. One day, Bob is walking down the street while whistling musically. One of the cops sees Bob and frightens him, leading Bob to run into a bush then accidentally into a marrying couples' wedding cake, which then slightly covers their faces. Bob then topples down the chronicler then proceeds to run away as guests gasp. Don Cannelloni angrily grabs Bob and now his trouble starts again. Once again, Bob robs, but this time, in Playa Mafioso to repair Don Cannelloni's daughter's wedding. After some stealing, Bob steals a police hat then shows it to Don Cannelloni. One of the police saw his hat and scares Don Cannelloni.

Bob travels to an unsually weird place known as Shamville. A friendly brown dog (as seen in the first game) sees, likes and follows Bob in a sewer lab. Nickie Heisst, an investigator, finds clues regarding about the returning character, Dr. Thievious and his latest plot. Bob falls in love with her. The said dog has found Bob, which then barked, attracting Dr. Thievious' attention. As he found out that they are spying him, he tries to shoot them with his blaster, leading them to run away from him. Bob helps Nickie Heisst investigating the mysteries around Shamville. Bob then breaks levers to release acidic goo in every sewer. At the end of their investigation, Dr. Thievious is now captured and arrested by the police, however, his helmet makes a creature act strangely.

Bob goes fishing in Seagull Bay. As his fish bait submerges underwater, Bob gasps in curiosity, wondering what he catches. When Bob finally pulls his fishing rod, a man named Manny Roswell suddenly emerges from water. He then tells Bob about an alien invasion. Bob is scared and Manny Roswell has an idea to repel them: a device known as the terra firma device that can raise a forcefield. Bob steals items in order to complete Manny Roswell's invention. After holding random items in place with duct tape, Bob and Manny Roswell activate the said device. However, one of the aliens attempted to abduct Manny Roswell, suggesting that one of them was in their vicinity before the forcefield can even repel them.

Bob accidentally beats *Konrad Telemark in a skiing event in Pilfer Peak and "steals" his trophy, angering Konrad. It started as Konrad doing his infamous stunt. Bob then crashes out of the window while sporting skis. Bob gasps in fear as he is about fly off from a ramp. Accidentally performing a frontflip stunt and landing perfectly, the crowd goes wild raising Bob who's holding a trophy. Konrad, although, still brags about himself being the best skiers around, regardless his loss to said event. Bob decides rob again while discovering Konrad's attitude, plot and history. After that, Bob also decides to challenge Konrad, twice after Bob doesn't feel the first challenge being too fair. Bob finally beats Konrad again, leading him to leave the ski resort forever.

Bob and *Cassie are ready for a Trick or Treat in a haunted mansion in Hauntington. As Bob and Cassie approach to the mansion, Cassie knocks the door, waiting for someone to give candy to them. Cassie, who's addicted to candies, grew impatient. She then throws eggs at the front door, disturbing and angering the ghosts inside the mansion. Bob and Cassie then run away from the mansion. They now  investigate scary mysteries in every haunted houses to find out the reason of the ghosts' anger and to receive candy before Halloween ends. Bob robs possessed objects and attempts to return the ghosts. After that, the ghosts happily thank Bob for returning them. Cassie then shakes hands with the mayor, who then gives Cassie a bag of candies as a reward.

Differences from the first game

Community content is available under CC-BY-SA unless otherwise noted.
Advertisement