Bob is the main protagonist of Robbery Bob. He is the player character and a robber. In the beginning, Bob was freed from jail from a strange dealer who deals with Bob to get and steal money because he had a deal. Bob robs houses and in the last second-to-last level of Suburbs, it is revealed that the strange dealer is evil as he traps Bob in a high-security mansion but Bob is able to escape. After escaping, Bob tricks the police into imprisoning the dealer while Bob gets away with all the loot he robbed for him.

After escaping, Bob travels to the Downtown area. Shortly after getting there, he is forced to work for Biff, one of the local criminals after ruining Biff's ice cream. Bob goes on a robbing spree across the town, stealing everything from Money to Video games. When Bob sneaks into DA's office and steals the incriminating evidence that is going to be used against Biff, Biff decides not to let Bob go and instead use him to get rich. Bob, however, sneaks into Biff's apartment and steals a variety of things (most notably a big pile o' cash found in Biff's bedroom) before running away with most of the things he stole for Biff.

Bob travels to a remote desert in an attempt to escape further trouble but is captured by Dr. Thievious, a mad professor who uses Bob as his new "lab rat" to steal things from Science facility that he needs for his latest invention, an Orbital Mind Control laser. Bob steals a lot of important parts and access codes but Dr. Thievious accidentally leads Bob to a secret exit which Bob uses to escape to the upper levels. After that Bob, while looking for the exit, accidentally triggers the facility's self-destruct mechanism. Bob is able to escape alive but the resulting explosion blew Dr. Thievious away and destroys the whole facility. Seeing flight from crime as useless, Bob decides to continue as a small-time robber, using his newly-sharpened skills.

With the release of the sequel, Bob's adventure continues. One day, Bob is walking down the street while whistling musically. One of the cops sees Bob and frightens him, leading Bob to run into a bush then accidentally into a marrying couples' wedding cake, which then slightly covers their faces. Bob then topples down the chronicler then proceeds to run away as guests gasp. Don Cannelloni angrily grabs Bob and now his trouble starts again. Once again, Bob robs, but this time, in Playa Mafioso to repair Don Cannelloni's daughter's wedding. After some stealing, Bob steals a police hat then shows it to Don Cannelloni. One of the police saw his hat and scares Don Cannelloni.

Bob travels to an unsually weird place known as Shamville. A friendly brown dog (as seen in the first game) sees, likes and follows Bob in a sewer lab. Nickie Heisst, an investigator, finds clues regarding about the returning character, Dr. Thievious and his latest plot. Bob falls in love with her. The said dog has found Bob, which then barked, attracting Dr. Thievious' attention. As he found out that they are spying him, he tries to shoot them with his blaster, leading them to run away from him. Bob helps Nickie Heisst investigating the mysteries around Shamville. Bob then breaks levers to release acidic goo in every sewer. At the end of their investigation, Dr. Thievious is now captured and arrested by the police, however, his helmet makes a creature act strangely.

Bob goes fishing in Seagull Bay. As his fish bait submerges underwater, Bob gasps in curiosity, wondering what he catches. When Bob finally pulls his fishing rod, a man named Manny Roswell suddenly emerges from water. He then tells Bob about an alien invasion. Bob is scared and Manny Roswell has an idea to repel them: a device known as the terra firma device that can raise a forcefield. Bob steals items in order to complete Manny Roswell's invention. After holding random items in place with duct tape, Bob and Manny Roswell activate the said device. However, one of the aliens attempted to abduct Manny Roswell, suggesting that one of them was in their vicinity before the forcefield can even repel them.

Bob's face when seen by guards 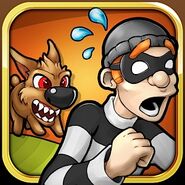 Bob in the app icon 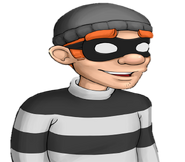 Bob when hes talking (old)
Add a photo to this gallery
Retrieved from "https://robberybob.fandom.com/wiki/Bob?oldid=6746"
Community content is available under CC-BY-SA unless otherwise noted.